Your shoes can tell you a lot…including whether you are landing harshly, and which type of shoe might be best for you.

Most people don’t know it, but the wear pattern on a well-used pair of running shoes can tell a pretty good story.   That story may include the fact that you are over-striding and landing with more impact than you need to.  It may also tell you that you should work on strengthening your feet, or that you have a leg length discrepancy.   Often, runners go get a gait analysis at their local running store, not knowing that bringing a used pair of shoes can likely tell the staff a whole lot more about what shoes will be best for you than watching or filming you run ever could.  In fact, gait analysis for shoe selection can be misleading.   About 50% of all running shoes sold are so-called “Stability” shoes.  However, only about 1 in 9 running shoe wear patterns show that a runner *might* benefit from the so-called “stability.”

Now that you’ve got a suitable pair of shoes to read, it’s time to flip them over and look at the wear pattern on the rubber outsole.  In my opinion, the most important thing you should look at is the heel area of each shoe.  If your shoes show significant wear at the outside back corner, you are likely over-striding and landing with a lot more impact.  A study by Harvard scientists found that over-striding, or excessive heel-striking produced three to five times more impact than runners who landed closer to underneath their bodies and didn’t land with a harsh heel-strike.  This type of landing also causes excess torque in the joints, which many scientists believe is actually even more of a cause of running injuries.

If your shoes show this wear on the very back outside heel, I recommend a few simple tips such as not letting the elbows swing forward past the hips and taking quicker steps.   Most runners have never had a running lesson, so finding a coach or running store nearby that teaches a class could be very beneficial.  Interestingly enough, virtually no one was over-striding before we had running shoes with cushioned, elevated heels. Putting a pair of shoes with no elevated heel in your shoe rotation can help make it easy to stop over-striding and develop a more natural, low impact stride.  Additionally, using a pair of shoes without an elevated heel can also help fix any pronation-supination irregularities as well. For more on improving your form and optimizing your landing, check out the tips here. 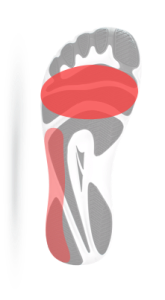 Now that we know that landing on the outside is normal, the next thing to look at is which part of the forefoot of the shoe has the most wear.  Your foot absorbs impact by rolling inward and then pushing off your strongest toe, which is your big toe.  So, an ideal wear pattern will show the most wear on the
forefoot in the middle to slightly inside part of the shoe.

The running shoe world calls this “neutral.”  If this is you, you will likely naturally avoid “stability” shoes and shoes with any kind of dark material under the arch or shoes with any extra arch support or “control” features.

If wear is more towards the outside, you aren’t pronating or absorbing shock very well, and you are a “supinator”, which is very rare…so much so that major running shoe companies don’t make supination specific shoes. Most supinators tend to like more cushioned shoes, as their feet don’t absorb impact very well.

If your wear is on the inside part of the forefoot, then you are likely an “over-pronator” meaning that your feet collapse more than usual, causing the leg to do the same and likely causing excess joint torque.  For some, this is a bone deformity, collapsed arch, or genetic inheritance.  For others, their feet are simply weak from a lifetime of wearing so-called “supportive” shoes and/or orthotics that move the foot out of its natural position and weaken the foot muscles.  Most people that over-pronate will benefit from a foot strengthening regimen that could include standing on one foot, pulling a towel in with the toes, and/or running or walking short distances barefoot on soft surfaces.  A device called “Correct Toes” is a great benefit for strengthening the foot and helping to re-align it to its natural position, and I highly recommend them for nearly every runner. Along with this, wearing a shoe with a foot-shaped toe box—like pictured above—allows the big toe to straighten out and provide the right amount of natural stability for the foot.

If your wear pattern shows that you are an over-pronator, you may be among the 1 in 9 people who may benefit from wearing a stability shoe until your feet re-align and get stronger.  As long as your wear pattern continues to show wear on the inside of the forefoot, it may be best to stick with a stability shoe.  However, it is important to note that outside of a weak link to shin splints, excess pronation has never been significantly tied to running injuries.  Additionally, multiple studies have shown over-pronators to be slightly less injured while wearing neutral shoes. Traditional stability shoes with dual density or medial (arch) posting have also never been shown to actually reduce pronation, but rather only make it appear so.  Only varus wedges (a wedge that is higher on the inside of the foot than the outside) have been shown to truly reduce excess pronation. The question is whether we should be even be trying to reduce excessive pronation.

Also keep in mind that 83% of runners are less injured in a shoe that doesn’t mess with what the foot and body naturally wants to do—in essence, the shoe that feels the most comfortable, barefoot, relaxed, and free.  Interestingly, about 1 in 7 runners is less likely to be injured while wearing a stability shoe.  However, only about half of those runners had excessive pronation—the other half had neutral biomechanics. The take home message here is to go try a bunch of different types of shoes and only judge them by how they feel when you are actually running in them. How they feel standing and walking are mostly irrelevant.

One more thing to look for is irregularities between the left and right shoe.  This can give you clues in to any imbalances you might have or injuries that occur due to this or favoring one leg over another.

One way to partially or even completely nullify unwanted stride patterns on a shoe is to run on uneven ground, such as trails, grass, or even cobblestones. If you run off road enough, the irregular surface can improve your technique and help correct any imbalances you might have.

Reading your shoe is one of the most effective ways to know what is going on with your body, and is in many ways far more reliable than photos, video, or other ways of seeing the way you run.  Most importantly, a reminder that according to studies done on running shoes and injuries, runners will be least injured in the shoe that they feel the most comfortable, relaxed, and free in *while running*—regardless of category. So go in to your local running store and try on a half dozen pairs of different types of shoes and buy the one that feels the most comfortable and like it’s not there—even if you have a neutral wear pattern and that shoe happens to be a stability shoe!